UP CLOSE : Fascinating history of the market at the heart of Radstock 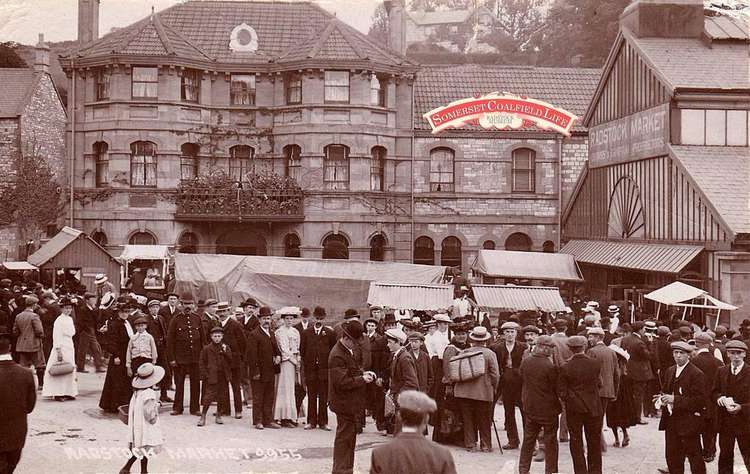 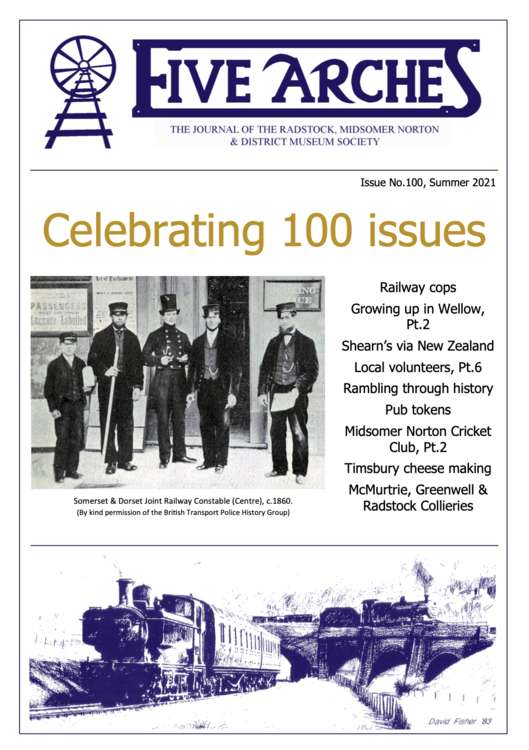 Local history is flourishing with Five Arches' ( the name that was given to the local history journal of the Radstock, Midsomer Norton & District Museum Society back in 1986) having just celebrated its 100th issue when its first issue was published. 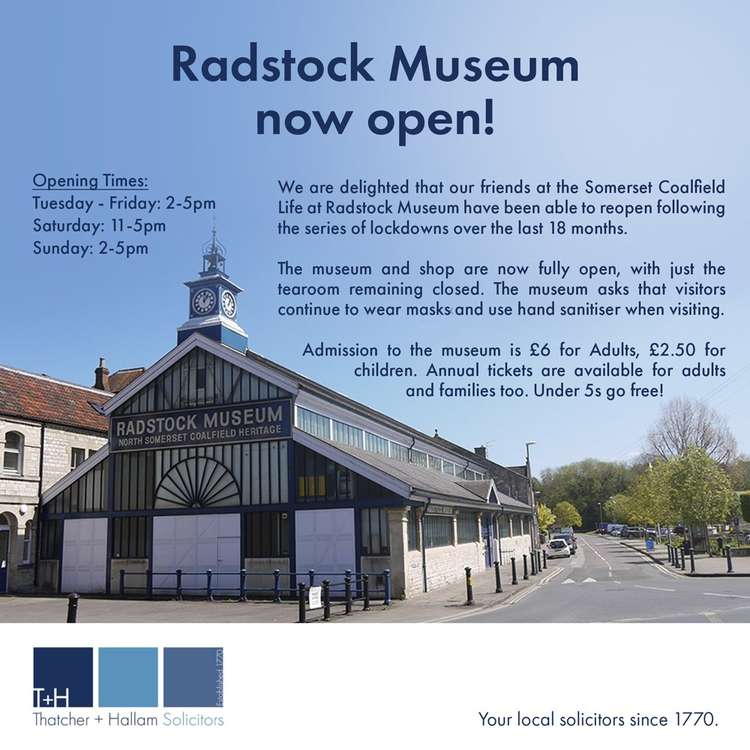 The museum is now fully re-opened

The Somerset Coalfield Life museum at the heart of Radstock is now fully open. It is a wonderful, and award-winning museum. But with it crammed full of local history - do you know ITS own history?

The story of Radstock Market begins with a local man called Moses Horler. Moses was born at Roundhill, Bath Old Road, Radstock in 1818. He was a stone mason, devout Methodist, and Sunday school teacher and he wrote and published his "Recollections" in 1900. Working class biographies are scarce, and so his recollections contain important memories about working class life in Radstock. In his recollections, Moses mentions a meat waggon arriving at the market in 1847 and this is the first known reference of a market in Radstock. In 1848 brewers George Coombes and his brother Joseph Combes moved from Camerton to run the Bell Inn, Radstock (which is the stone building, now flats, to the left of the museum) and The Lamb Inn, Clandown. They grew their brewing business producing Clandown Bitter sold widely across the West Country and even into Wales. The brewery was housed in the square red-brick building that still stands today behind Radstock Museum. It was a tower brewery, whereby there were several floors starting on the top floor, with a different process taking place on each descending floor producing the beer. The Coombes brothers then took on the Waldergrave Inn (Now Radstock Hotel and Bars) and matured their beer for 2-3 years in the cellars beneath the inn. Their company name was Coombs' Clandown & Radstock Breweries & Hotels Co. Ltd. The Coombs family owned the land on which the market took place. [H]A Saturday and Wednesday market in Radstock [.H] In 1872, a trade directory refers to the market as "well provided with produce from the surrounding country" and by 1880, there was a collection of shed-like structures forming an enclosure within the Bell Inn area which formed a more permanent outside market. These structures sat in a yard with a low wall around the perimeter topped with railings. The market took place on Saturdays and was popular with not only Radstock people but folks from all the surrounding villages who would travel into Radstock to shop at the market. As well as a Saturday market, there was a Wednesday livestock market in Waterloo Road Radstock both sites being owned by the Coombs family since 1848. The market was of course the place where the local mining families would buy their provisions. Early on a Saturday the gang leader of each team of miners would collect the weekly wages from the office on Frome Road. The gang leaders would then go into the Bell or the Waldergrave Inn to distribute the wages to their gang members. The wives would be outside the pub (they were not allowed inside) waiting for the men to come out and hand over their wages so they could buy the provisions at the market for the family, hoping the money would not all get spent on beer in the pub first. In the late 1800s Tom Martin, a surveyor, Radstock born and bred, was appointed by George Coombs (the brewer and owner of the market site) to design and project manage the building of a new market hall which was built over the period from 1897-1898 costing £2,500 Tom Martin also designed the Methodist Church in Radstock (which sadly is to be closed in January 2022).

The Market Clock, visible both inside and outside the Museum, was made by F.S. Lane, who made clocks, watches and jewellery at his shop in The Street. Originally illuminated by gaslight and paid for from the rates, it was the only public means of knowing time in Radstock apart, of course from the sounds of the local pit hooter

The Somerset Guardian and Radstock Observer newspapers reported in 1898 that: "The new market premises of Messers Coombs and Co which have recently been in course of erection are now rapidly nearing completion. Perhaps the most conspicuous addition to the premises is the clock, which has been placed in the tower of the building by Mr FS Lane, it contains all the most recent improvements for correct time keeping, some of them being by Mr Lane himself. The arrangement for working the four sets of hands is an ingenious construction, being especially designed not to cast any shadow upon the three outside dials when illuminated by gas light"

Inside provided of or seventy stalls in three avenues supplying good of all the essential commodities from a piano to a parsnip.

Outside in an open space were a number of all shapes and sizes of wheeled wooden stalls offering fish fruit vegetables, the lot sprinkled with visiting pedlars of various quack and catch penny gadgets."

"Saturday was always a favourite day; it was market day. The normal unhurried calm of every weekday was transformed into a crowded and bustling community, which was the highlight of the week and affected the business and social life of the whole town. After being invalided out of the First world War my uncle Mr Bert Line had a stall selling cheese, butter, and bacon just inside the door opposite the Somerset and Dorset station. Mr Bill Fern had several stalls crammed with boots and shoes. He had a gang of us school children put them out in the morning and collect them up at the end. Mr Skinner repaired boots and Mr Marshall sold toys and all the butchers were based on the raised floor of the market. Mr Rich sold seeds and gardening tools and Mr and Mrs Perkins sold sweets; we bought the pink and white minty shrimps which we took down to the stables on the right-hand side of the Waldergrave Hotel and gave some of them to the horses - they loved them One trader would pull out teeth for a small fee using no anaesthetic or injection with his captive audience looking on aghast As well as inside stalls, here were many stalls outside the Bell and the Waldergrave. One outside trader I clearly remember was a quiet and pleasant one-eyed fishmonger whose undeserved fate was to be machine gunned by a German plane in the streets of Bath during the Blitz on the city One memory I always retain of the market was on dark evenings the lighting of the stalls especially those outside, their lights were paraffin lamps quite graceful in some ways They were brass, and they gave off a ring of white flame. They gave atmosphere and character to the evening market, but never buy food from underneath the lamps as it would be paraffin flavoured! I have many happy memories of Radstock Market- its friendliness and its trades people. It contributed greatly to the business, social and community life of our small market town. "

Final days - and then revitalised by being turned into the museum

The market remained until the early 1980s when it finally closed probably due to a change in the way people shopped during the 1970s and 80s moving from the high-street and markets to larger supermarkets with car parks. The market hall building remained empty until 1998 when it reopened as Radstock Museum. In 1995 the Museum Society with assistance from the local authority purchased the market Hall at Radstock and a Heritage lottery grant allowed the renovation and furnishment of the building ready to house the collection of local artefacts from life in the Somerset Coalfield. In 1998 the new museum opened its doors. Since this time the museum has welcomed visitors from the local area and from all over the world and recently was recognised by The Guardian as one of the top ten small museums in the UK. Complied by Lucy Tudor Volunteer Radstock Museum with extracts from the book 'Radstock Reminisces' by Radstock Museum Volunteers with information from Five Arches Journal. 'Radstock Reminisces' is available from Radsock Museum Shop.

Human rights risk to councillors from revealing property outside B&NES